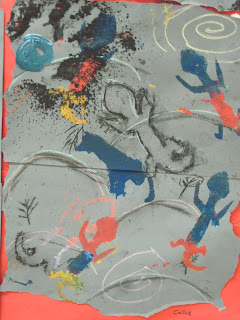 I found this basic idea on Artolazzi. Except instead of focusing on Lascaux, I had my students look at cave paintings from the Anasazi Indians, which was an ancient Pueblo tribe in the Southwest of the United States. 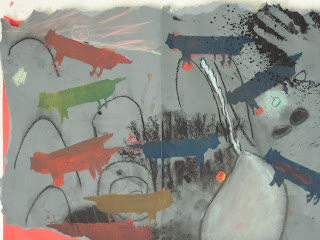 I began by having the students tear the edges of the paper to make it look old. Then students drew a few simple hills and other symbols on their page. Students then made their own animal stencils. (I did allow students to share their stencils after they were made). Students used their stencils in two ways. First, they used chalk to outline a few of their animals. Second, students used sponge painting as a different way to use the stencil. Lastly, I used a spray bottle full of paint to put their hand prints on the page.

I did show students examples of cave paintings with hand prints on them. I don't know why the cave painters put hand prints on the wall, but my class theorized that maybe it was kind of like signing your art when its finished. I liked this explanation, but have no idea if that is the real reason or not. 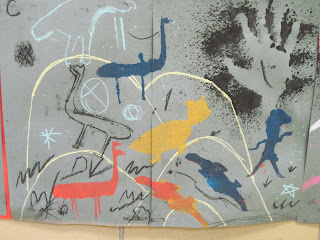 For the most part, I really like the results. Next time, however, I will have them think more about placement of the stencils. Many of them became very random and cluttered. It would have been good for me to talk a little more about composition. Next time, I will perhaps talk about using their symbols and animals as a way to tell a story.
Posted by Holly B. at 3:58 PM