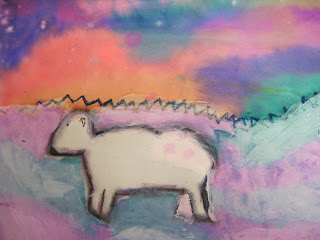 The day before Christmas break, I had my fourth and fifth graders paint these polar bears. This was a quick filler lesson, that really could have been better. I had planned it quickly, and should have thought through the potential problems. However, the results still turned out nice anyway. 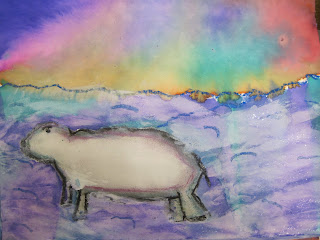 Basically, I had the students draw a polar bear onto a piece of paper. They drew it first in pencil, and then outlined with oil pastels. Then, I had the students use liquid watercolors for the sky. I had the students paint the sky entirely with water before adding the watercolor. This wet on wet technique helped make the sky blend together nicely. The sky was definitely one of the best parts of this project. 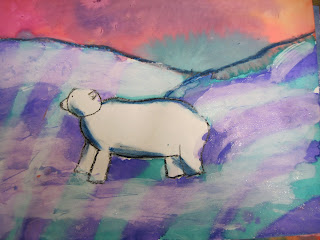 For the ground, I had the students use blues and purples. This was where things began to go wrong. First off, the watercolor dripped and smeared onto the polar bear. Honestly, I should have known this would happen. I should have had them draw the polar bear on a separate piece of paper. Then, they could have cut it out, and glued it to the background. Second, I had not meant for the entire snow to be blue and purple. Really, I just wanted those colors to be shadows in small spots. However, when I realized what was happening, I quickly came up with a solution. I handed out a little bit of white tempera paint, and had the students finger paint a thin layer of white over all the snow. I had them use their fingers mainly to keep the paint really thin. I wanted them to be able to see the watercolor through the white paint. I actually think this turned out pretty well. All of these problems could have been avoided had I not waited till the last second to plan. At least the lesson wasn't a total loss.
Posted by Holly B. at 4:16 PM