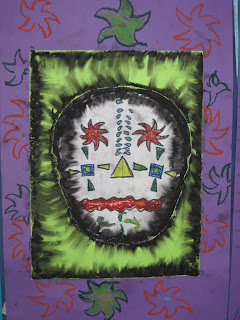 My fifth graders have recently been studying the Mayans in their history class, so this was the perfect time to do a Mayan art project. This project also fits perfectly into the Day of the Dead as well. I found the idea for this project on Painted Paper; I changed it a bit in order to get it done in a hour class, but the idea is the same. Before beginning the lesson, I showed students examples of Mayan artwork, and specifically showed them a few examples of decorated skulls. We also discussed how the Day of the Dead actually dates back to the Mayans and the Aztecs. 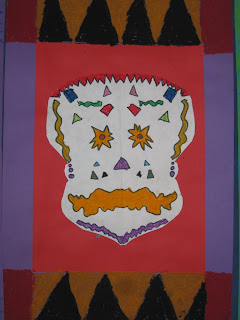 To begin this project, I had the student fold a piece of white paper Hot Dog Style. Then, students drew half a skull right along the fold. Students then cut the skull out. Next, I had the students draw wild and crazy faces on the skulls. The only rule was that it had to be symmetrical. Students then colored everything with oil pastels. We then glued the skull to construction paper, and decorated the boarder with patterns. 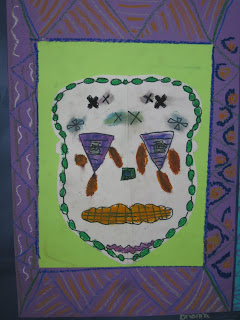 These turned out pretty cool. Some of them look more like masks than skulls, but they are awesome anyway.
Posted by Holly B. at 2:21 PM